A Mandarin dual-immersion school coming to Richmond next year is roiling adult education teachers in the city, who fear the new campus will ultimately disrupt long-established programs that cater to many in the community's low-income, immigrant population.
The highly-touted new Mandarin school, which will at first offer three kindergarten classes and then expand after the 2018 academic year, will be temporarily housed at the Serra Adult School campus. It will be one of four public schools in the state that offer school-wide immersion programs in Mandarin.
While adult education teachers have been quick to praise the district for offering the immersion program to the community's youth, some expressed concern that its placement at the Serra campus will displace continuing education courses already there, specifically English language and high school equivalency programs.

"It all feels very uncertain," said Kristen Pursley, who has been teaching at Serra since the 1990s. "We haven't been a part of the discussion, whatsoever, so we don't know what's next."
The district is spending $125,000 to upgrade the Serra Adult School campus for kindergarten students, and an additional $75,000 will be spent to build a kindergarten playground. Because of these expenditures, some teachers believe that all adult education classes at Serra will eventually be reduced, moved, or canceled completely, a claim the district has denied.

However, the adult education's administrative offices have already been forced to relocate three miles away to Alvarado Adult School, decentralizing a hub that is essential for academic testing, teachers said. Physical education classes have also had to switch times and locations. The district claims that "nearly all" of the adult education classes at Serra will run uninterrupted through 2018, but a location plan for the 2019 academic year has yet to be finalized.
Teachers argue that the district's focus on the immersion program has been myopic and irresponsible.
"In order to create a new resource, they’re kind of breaking up and damaging a resource they already have," Pursley said. "When you do that, you’re not really gaining anything. You’re trading one of thing for another."
About 40 supporters of the Serra campus rallied the Board of Education meeting on Wednesday evening, pleading with the board to take into account program displacement before expanding the Mandarin immersion school. They would like to see a guarantee that adult education can remain at Serra after the next year, a reassurance that the district has been reluctant to offer.
Educators also expressed concern that future students wouldn't have easy access to similar programs if the courses do move over to the Alvarado campus. A location-preference survey filled out by Serra attendees overwhelmingly showed that people from the northern areas of Richmond and from San Pablo would have a difficult time getting to Alvarado.
"When I started taking classes, I didn't know any English," said Rosa Alvez, who now works for the school district and has gone on to earn two degrees. "The ones who make decisions still don't understand how important it is for the ESL students to learn English here. This program opens many doors for us and it looks like they are trying to keep them closed to us."
Jim Knebelman, who teaches English courses at Serra, said displacing a school that caters to an immigrant community currently "under attack" from the Trump administration goes against Richmond's values.
"It's like an absurd, cruel joke," Knebelman said. "They're going to be displacing a school that overwhelmingly serves people of color and immigrants to build the immersion school. And it's not just the English language classes -- it's also high school equivalency. Those are kids from flatlands who, for whatever reason, didn't finish the first time around."
In an email to NBC Bay Area, Superintendent Matt Duffy reiterated his commitment to adult education offerings in the community. He also noted that the immersion school would only be at the Serra campus for a few years.
"To be clear, there is absolutely no intent to shutter Adult Education," Duffy wrote.
In a previous letter to the Richmond community, Duffy wrote that moving adult education from Serra could actually benefit its students.
"The District is also looking at this transition as an opportunity to review where our adult education classes are held," Duffy wrote in the letter. "There may be an opportunity to locate classes closer to public transportation and in more locations throughout the District, which may better serve our adult students."
But the letter did little to assuage displacement anxieties, and it ultimately irked teachers who view the campus as a home and welcoming environment rather than a simple brick-and-mortar location.
Pursley believes the Mandarin school's expansion, and the good publicity it has generated for the school district, will make it a priority that comes before the adult school. And, when the Mandarin school finds a new permanent campus in three to four years time, some teachers are under the impression that they won't get the campus back. Instead, they fear it will be sold to a charter school or used to house other programs.
"One of the things the district is trying to do is diffuse the situation and take away the sense of urgency, by saying 'you're okay for one year'," Pursley said. "We appreciate that them trying to mitigate some of the damages, but it's not permanent...It doesn't seem like they view this as a resource."
She continued: "If the Mandarin school grows — and everyone here hopes it will — we're fully believe we are going to get pushed out." 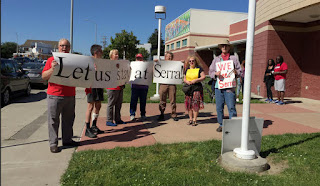 For more on this subject, see http://www.eastbaytimes.com/2017/05/11/plans-to-phase-out-richmond-adult-school-campus-draw-protest/