Bruce Neuberger is a long-time ESL teacher at both our school, San Mateo Adult School, and at CCSF (City College of San Francisco).

Bruce is one of the few teachers who has the unique perspective of working within both systems.

Bruce spoke at the CCAE Bay Section Conference this past Saturday, Feb 23rd. 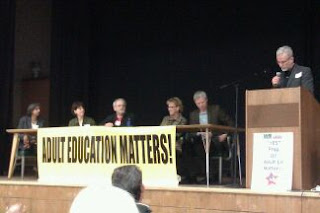 (Bruce is seated at the center of the table.
Dr. Bob Harper is at the podium.)


Here are his remarks:


This has been quite a year.  Last spring we were embroiled in a struggle that was greatly heightened by the realization of just how many hundreds of thousands of people were lost to adult schools across the state – victims of so-called flexibility.  And then, faced with the devastating prospect of the Weighted Student Formula we worked to defeat that. At San Mateo adult school we held a press conference in June to denounce it and try to reach a broader public ear.  And no sooner had that threat diminished some, than the other school where I teach, Community College of San Francisco was put on Show Cause status, by the ACCJC, the educational equivalent of a mafia hit squad – a private accreditation agency partially funded by the Lumina Foundation, and overseen by people connected to the for-profit education industry.  (The ACCJC is authorized to operate by the U.S. dept. of education and overseen by a National Advisory Committee -- NACIQI National Advisory Committee on Institutional Quality and Integrity --  whose vice chair, Arthur Rothkopf was senior vice president of the U.S. Chamber of Commerce from 2005 to 2010 and board member of the Educational Testing Service, Inc.  The NACIQI panel includes the president of the University of Phoenix, the largest for profit college in the U.S. )

In both these situations it’s been very gratifying and uplifting to see the way people have come forward together, the teachers, staff and administrators at San Mateo, supported by the eloquent and really moving testimony of many students speaking to the importance of adult schools, how it changed and enriched their lives.

On Thursday at CCSF students held a march and then a sit-in and building occupation and I listened for hours as student occupiers spoke about the importance of community college. And I wish I could begin to convey the power of the sentiments so eloquently expressed there.  Previous to that, on February 6th nearly 400 people came to a meeting organized by the Save CCSF Coalition at the Mission campus.   Many of them were non-credit ESL students, there to express their fervent support for that public, community institution.

And a core of faculty, students and community people have poured their souls into the effort to save community college.  And this continues and it could and needs to spread.  So this is powerful and I’ve been very moved by this.

I’ve also been moved by the callousness and ruthlessness of those pushing to destroy public education.  And I think it’s important, while we struggle, and we must, to defend public education and unite as broadly as possible while we alert the public as to what is going on, that we take a look at the broader landscape.  And I would pose it this way:  What kind of society destroys its own educational system; what kind of society, what kind of system, would deny education, and even work to undermine education, spending more on incarcerating its youth than educating them, and, I might add, spending more hounding, detaining and deporting its immigrant working population than educating them?  What kind of system is this, and is this the best we can do as a society?  What kind of future does this portend?  It’s critical to fight to defend the rights of the people, including the right to education, and to fight with our eyes open while looking at the broader reality around us.

But I’m here to talk about a particular proposal by Governor Brown.  So let me say what I think.  I’m no mathematician but some numbers here even I understand.  Let’s take the numbers 450,000 and 600,000.  450,000  is the drop in enrollment at California community colleges as a result of the cuts in the past 4 - 5 years.  600,000 – some would say that’s a very conservative number – refers to students who no longer are enrolled in Adult schools, due to the deep cuts that have come through this imposed "flexibility".   A million people, shoved out the door.

The governor says that community colleges can take over the functions of adult schools.  OK then, let’s look at a place where they already have.  That’s Community College of San Francisco.  CCSF since the 1970s when adult schools merged with the college to form the non credit program, has done an excellent job in ESL, GED, VESL and so on, to serve immigrants, post high school youth, and others. And how have they done it?  They’ve done it by doing what adult schools do well, by making school accessible to people who need these classes.  CCSF has 9 campuses and scores of other sites around San Francisco.  It is a well and deservedly loved institution in the city.  But now we have the Student Success Taskforce, a plan to change community colleges, reduce them, make them more exclusive.  In the course of carrying out this restructuring the media, with the S.F. Chronicle leading the charge, has attacked CCSF for, guess what, having too many campuses and too many sites.  There’s pressure to close sites (I was told this directly by one of the deans there).   This Spring semester non-credit, part time ESL instructors with less than 12 years seniority were laid off.   Enrollment personnel at non-credit sites have been laid off along with other deep cuts to clerical staff, the janitorial staff and the counseling staff, among other cuts.  Some major noncredit sites have no one to enroll students.  What does that do to enrollment?  To run down all despicable things that have been done to CCSF behind the fraudulent mascaraed of accreditation would take up this whole conference.

CCSF has been one of the most vocal campuses opposing the Student Success Taskforce and the dismantling of community college.  For that reason targeting and crushing resistance at CCSF has become part of the process of transforming California’s community colleges.  The point is that at the same time Governor Brown is promoting his plan to “save adult ed” by putting it under the Community college system, he is overseeing the dramatic restructuring and reduction of that same system.  There’s an interesting irony here.  If Meg Whitman had managed to parlay her fortune to be governor many people would be saying, “see, if only the Democrats had won, etc.”  The reality  is that the ugly face of privatization of education, like so many other unpleasant things, is a very bipartisan affair.  And, by the way, the CCSF example also includes a strong element of union busting.

The other relevant numbers that come to mind are $300 million and $700 million.  You all know about that.  It doesn’t add up.   And it doesn’t add up because Brown’s plan is not a plan to save adult ed, but to eliminate it, but in a way that gives the appearance of saving it – or maybe saving a token part of it.   Brown is an astute politician and he didn’t get to be where he is without mastering the art of sophistry and populist jargon, or as we liked to say, a bit more delicately in the lettuce fields, hablando pura mierda.   It’s dangerous to have illusions about people like Governor Brown, and this is not a personal thing – he works for the corporate agenda, which is the only agenda you can work for and hope to retain high office in this country.

Where does that leave us?  If we can cast away our illusions about the political system then we’ll have a good chance.   Because education is something that strikes at the very souls of people.  The privatization of the public education system which we are witnessing, and the dismantling of parts of it, are deeply wounding to many people.

I would say that any plan to address adult education that does not address the fact that hundreds of thousands of people, including the marginalized and often forgotten rural working people, is a non-starter.  So first, re-fund and reopen the adult schools that have been shut down or decimated, and work to keep community in community college, and then it might be possible to talk, in a serious way, about merging aspects of the two systems.

I appreciate the excellent job that lobbyists like Dawn Koepke have done for adult education.  But we know that even the most impassioned and intelligent lobbying is not going to defeat the powers arrayed against us, nor force them to back off. Frederick Douglass told us,  “Power yields nothing without demand”.  He knew what he was talking about.  I propose that while we reject Brown’s phony plan, we begin organizing and demanding that schools that have been closed be reopened.  Where to begin is something that would have to be figured out but it seems that Oakland is both close at hand and a glaring affront.  The Fruitvale is one of the most vibrant and important immigrant communities in the country.  The fact that Oakland does not have an adult school is outrageous!

I propose that the CCAE, with the support of all of us in this room and those who will come to this conference, and all we can rally, undertake a campaign.  Go to the churches, to the flea markets, to community organizations and schools, with flyers and petitions.  Find out how many people would come to adult ESL classes in Oakland, for example, if they were available.  Do you think a movement could be begun on that basis?  I think it could.  With the government making all these noises about immigration reform and the rest – and let’s not be deluded here – the reason the Republicans and Democrats have suddenly awoken to the need for immigration reform is because the corporate elite are telling them, we have to secure a reliable cheap labor force.  This is dramatically manifest in the fields where there’s a great fear among the agribusiness that there will not be enough cheap, disenfranchised labor, in the face of increased competition from super low wage regions in other countries.  But all this provides a potential opening, too.

I think it’s time for adult educators, to take the offensive.  We can call for the re – funding of adult schools while we unite with people to demand their basic rights as human beings.

Before I end I want to invite you to two events.  One is a mass rally at San Francisco City Hall March 14 at 4 PM to defend community college.   The other is a film showing of a very sweeping and audacious speech by Bob Avakian, Revolution, Nothing Less at Laney College, 900 Fallon St. Oakland, March 17 at 1 PM.  S