NPE, AFT, NEA All Say No to De Vos as Fed Head of Ed

By all rights this piece should be in the Perspective section. It's my opinion that Betsy DeVos would be bad for Adult Education and bad for Public Education, in general.  Many people and organizations agree with me.  Read on to hear why.  -- Cynthia Eagleton, ESL teacher at San Mateo Adult School

The Network for Public Education, the two large national teachers unions - the American Federation of Teachers and the National Education Association, Bernie Sanders, and any number of other individuals and organizations  - all say no to the idea of approving Betsy De Vos as Education Secretary for the United States.

There is someone who does like DeVos - and that person is new President Trump.  She is his choice for the job.

To learn more about how Adult Ed is funded across the country, click here.

To take part in a COABE webinar about Adult Ed under the new Trump admin, click here.


Further, Adult Education, as neglected as it is as a branch of Public Education, is nevertheless a part of that tree.  Of course, it matters who the head of the US Department of Education is.

We in California also know that when that larger tree of Public Education - be that on a federal, state, or local level - is shaken or sick, Adult Education is the first branch to be neglected or cut. That is what happened in 2008.  The Global Financial Meltdown led to shortage in the state budget which led to Governor Schwartzenegger's decision to make Adult Education the fund donor to keep the K-12 system going.  Adult Ed funds were "flexed" - that meant that if K-12 districts needed money - and of course, at that time, they did - they could use Adult Ed funds.  This is what led to over 70 Adult Schools being closed and all Adult Schools being cut in size and scope of service.

If the economy destabilizes in the next few years or if Public Ed destabilizes due to a shift into a "school choice" system, we know which branch will most affected and least likely to survive.  That's right, it will be Adult Education.

That's why it's crucial that we think hard about the potential appointment of DeVos as head of the US Department of Public Education.  DeVos is a big supporter of "school choice" and for-profit charter schools.  She has no training or experience in Public Education.  Neither she nor her children attended public schools.  She is a wealthy woman and a major donor to politicans and in her own words:

"In 1997, DeVos wrote the following in an essay for Roll Call: "I know a little something about soft money, as my family is the largest single contributor of soft money to the national Republican party. Occasionally a wayward reporter will try to make the charge that we are giving this money to get something in return, or that we must be purchasing influence in some way."

I have decided, however, to stop taking offense at the suggestion that we are buying influence. Now I simply concede the point. They are right. We do expect some things in return.

We expect to foster a conservative governing philosophy consisting of limited government and respect for traditional American virtues. We expect a return on our investment; we expect a good and honest government. Furthermore, we expect the Republican party to use the money to promote these policies, and yes, to win elections.

The US Senate HELP - Health, Education, Labor & Pensions - committee vote to approve of her appointment has been delayed to January 31.

Between then and now, we have the opportunity to speak up and tell the members of the committee what we think about DeVos and how her appointment might affect Adult Education. 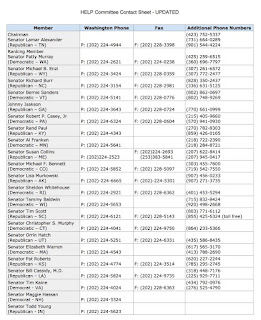 What the Network for Public Education says:

For those who don't know:  "The Network for Public Education was founded in 2013 by Diane Ravitch and Anthony Cody. We are an advocacy group whose mission is to preserve, promote, improve and strengthen public schools for both current and future generations of students.The goal of NPE is to connect all those who are passionate about our schools – students, parents, teachers and citizens. We share information and research on vital issues that concern the future of public education at a time when it is under attack."

"When De Vos has to choose between quality schools and “the free market,” she chooses “the free market” of privatized choice every time. The best interests of children take a back seat.
And we know the DeVos endgame–shut down our neighborhood public schools, and replace them with a patchwork of charters, private schools and online learning.
We can’t let that happen and we need your help. Present and future generations of children are depending on us to act now.  We now know that some Senators have grave doubts. It is our job to make those doubts grow into active resistance to DeVos.  Here is their toolkit for stopping DeVos.

Professor Julian Vasquez Heilig is on the board of NPE.
Here's a link to his blog, "Cloaking Inequality" with a short 7 minute film about DeVos, "Stop Betsy DeVos" by Brave New Films.

What the American Federation of Teachers says:


What the National Education Association says:


1. Betsy DeVos has no training or experience in education.

She has never worked in a school in any capacity, and does not hold a degree in education (nor did she or her children ever attend a public school).


2. Like Donald Trump, DeVos is an ardent supporter of “school choice” privatization schemes, despite a complete lack of evidence that privatizing public schools produces better education.

In Michigan, Betsy and husband Dick DeVos have pushed for decades for so-called “choice” schemes and corporate charter schools, most of which have performed worse than the state average. They are long-time Republican party donors who support pro “school choice” candidates, and Betsy DeVos has served on the boards of two major groups leading the charge to privatize public schools.


3. DeVos has invested millions lobbying for laws that drain resources from public schools.

In 2000, Michigan voters rejected a massive effort led by Betsy and Dick DeVos to change the state’s constitution to allow private school voucher schemes that siphon money away from public schools. But Betsy DeVos has promoted these measures as chair of the American Federation for Children, and the DeVos family has spent millions to push for the expansion of vouchers in other states.

4. DeVos has fought against the regulation of charter schools.

The DeVos family gave nearly $1 million to GOP lawmakers in the Michigan legislature who gutted a bill that included accountability measures for charter schools in Detroit. Those charters will not be subject to the same oversight or regulation as public schools, even though they are funded with taxpayer money, thanks largely to the DeVos family.


5. Betsy DeVos is not a good fit for a position overseeing the civil rights of all students.

Donald Trump’s nomination of DeVos is deeply concerning to many civil rights groups, because school choice schemes promote racial segregation and undercut civil rights enforcement that is routine in public schools. Corporate charter schools have higher than average teacher turnover and closure rates, which disproportionately affect students of color and low-income families.
The DeVos family’s support for anti-LGBT causes is well-documented. Since 1998, the DeVos family has given more than $6.7 million to Focus on the Family, a group that supports “conversion therapy”—a debunked theory that purports to change the sexual orientation of gay and lesbian individuals that is strongly opposed by the American Psychiatric Association, the Human Rights Campaign, and scores of other medical and civil rights organizations.

Schneider is the author of the Deutsch29 edublog.  She is a phenomenal researcher.  She painstakingly fact-checks everything and provides links to facts, resources, statistics, etc.

Here are folks to contact with your opinion about DeVos and how well she might or might not serve our country as Fed Head of Ed for the US of A: