Assemblywoman Patty López introduced a bill to restore funding to adult education
AB 1846 will allocate $250 million from the General Fund to adult programs
There are 5.2 million adults in California without a high school diploma or GED 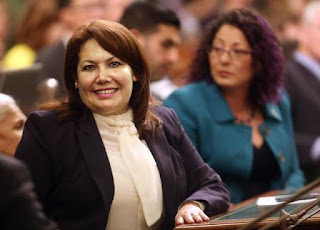 Minerva Molina left her native Torreón, Coahuila, México to pursue the American Dream. She has been divorced for 23 years and is a single mother of three kids. She speaks English as a second language and has two jobs to support her family.

Hit the link to read more.


When she came to the United States, she believed in giving her children a better life through the opportunity at receiving an education— not just for her children, but also for herself.

“We all want a better life for our families. And as mothers and adults, we are interested in child development and cosmetology and want to learn how to speak better English. We want to be a part of the American system because we know how it can benefit our children for the good,” said Molina.
Molina is one of thousands of adults who stand to benefit from additional funding to the adult education system in the state. Last Wednesday morning, Assemblywoman Patty López, D-San Fernando introduced legislation that would restore adult education funding in the millions of dollars.
Assembly bill 1846 intends to permanently restore adult education funding by appropriating an additional $250 million dollars annually from the General Fund to the California Community Colleges and the State Department of Education for ongoing support of the adult education consortium programs.


According to López, California has made the strongest commitment to adult education in the nation for decades by ensuring that adults have the ability to obtain the necessary skills to enter the work force and/or pursue higher education, but the recession of 2008 stopped all that.

“We have seen some of the most drastic cuts made to adult education in the last few years and it has been devastating to the people of my constituency and to so many others across the state,” said López.

“It is time we restore the programs and services that are associated with adult education and that are so vital to our underserved, low-income and immigrant communities.”
In 2013, the California legislature had passed AB 86 which condensed the amount of adult programs offered and created 70 regional adult education consortiums, made up of local community college and school districts.

According to an Adult Education Regional Planning report authored by the State Superintendent’s Office and California Community College Chancellor’s Office, about 65 adult schools were permanently forced to shut their doors due to the fiscal constraints between the years of 2008-2013.
The report also cites that many adult schools were shut down because they conflicted with the work schedules of adults, many of whom work multiple jobs during the week to make ends meet— others had hours of operation slashed while most suffered from limited resources available for students such as computer labs and tutoring.

López said adult education programs and schools are the stepping stones for many immigrant, and low-income families who are trying to assimilate into the American way of life.
“California is home to over 10 million immigrants and 5.2 million adults who do not have a high school diploma or GED. California must address its lack of adult education services if it intends to be the economy of tomorrow,” said López.

Matthew Kogan, the Director of Adult Education for United Teachers of Los Ángeles says adult education serves a population that is generally underserved.

“I teach ESL to adult immigrants and its a satisfying job. There is a woman in my class who was running with the wrong crowd at 14-years-old, dropped out of high school at 16 and got pregnant at 18. But, now, she wants to turn her life around and thanks to adult education classes, she will earn her high school diploma,” said Kogan.

Many adults who have committed mistakes during their youth, or faced extraordinary circumstances where they did not have access to an education, or even those who want a step up in society, all merit the opportunity to receive a quality education at an adult school, said Kogan.

“There are many adults who want a better life. Just because they don’t have a degree doesn’t mean they will be regulated to earning low wages for the rest of their life. If California wants to be competitive in the world, it must look at the needs of its underserved populations that are hungry for an opportunity,” said Kogan.

López’s bill, AB 1846 intends to restore adult education to its previous funding of $750 million annually and appropriate the funds to the adult education consortiums to build upon and restore services that were once offered. As a lawmaker who personally benefited from an adult school education, López believes it is the key to fulfilling a gap that is missing in California’s educational system.

“Adult programs helped me guide my daughters on the right path toward a college education and it helped me in many aspects of my life, that is why I know their value and their importance,” said López.
Posted by Tree C at 10:04 PM