When and Where is Education a Civil Right?

CAELA - Community of Adult ESL and Literacy Advocates, part of Harvard's Graduate School of Education, is holding a Summit on Adult Education entitled, "At What Age Does A Civil Right Expire?" on Saturday, April 26th, 2014. 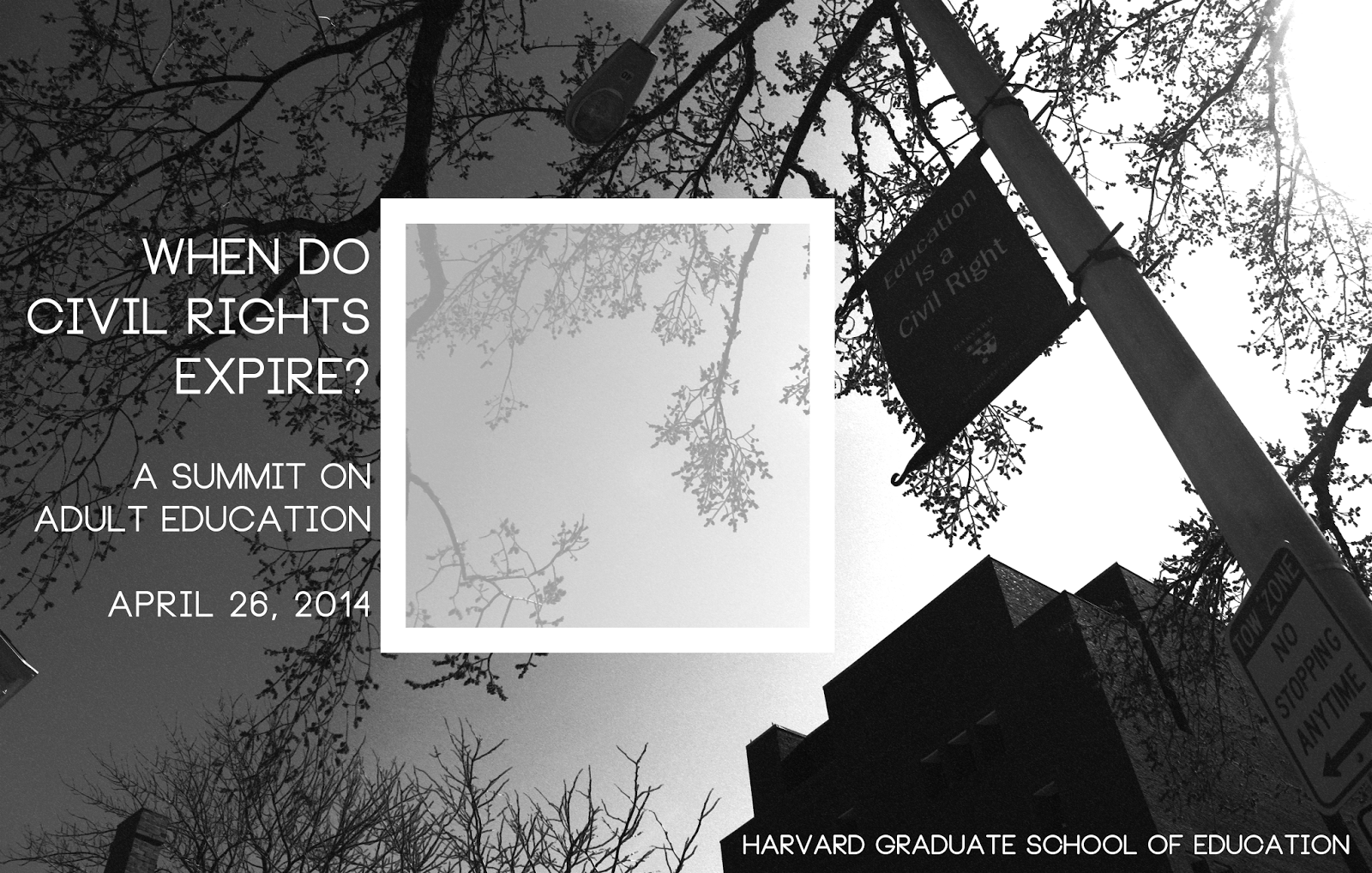 And hooray for our people who benefit wherever and whenever Adult Education is valued, considered, bettered, and funded.

I learned of the Summit because CAELA reached out to the San Mateo Adult School student leadership team.  CAELA is interested in how and why the students at SMAS are so active and effective.

CAELA reached out to A4CAS, the Alliance for California Adult Schools, as well.  Grassroots efforts from A4CAS, United Adult Students, COSAS, Save CCSF, and others have helped save Adult Education in California and continue to push for its survival, health, and improvement.  CAELA is interested in the role that grassroots organizations have had in determining policy.

While most of us came to Harvard with a particular interest in mind, many quickly became aware of a missing component needed in a holistic examination of education.  Adult Education - more specifically English as a Second Language and literacy - is absent from our discussions, coursework, events and research at HGSE. In hopes of starting a dialogue on this campus and beyond, a group of students from diverse programs at the Harvard Graduate School of Education teamed together to form Community of Adult ESL and Literacy Advocates (CAELA). Our mission is to create a community of allies committed to developing and sharing research and practices to inform policy. We aim to increase recognition of adult education in the areas of practice, policy, and research to improve practice and foster critical dialogue in this crucial area.

Let me pull a sentence out of that hat,

Adult Education - more specifically English as a Second Language and literacy - is absent from our discussions, coursework, events and research at HGSE.  (HGSE is the Harvard Graduate School of Education)

Can we substitute "at HGSE" with "at UC Berkeley, Stanford, UCLA, etc."?

I think we can.

San Francisco State University does offer a Masters Degree in Education with a concentration in Adult Education.  But SFSU holds no summits.

And UC Berkeley and all the other UCs, from what I can see, do not offer coursework on the topic of Adult Education or seem to consider it important except as a source of income when the Designated Subjects Credential (the Adult Ed Credential) is offered through their Extension programs.  (If any of the UCs offer coursework which address Adult Education concerns, please let me know.)

There is a dearth of discussion about Adult Education in academia in California.

The credential needed to teach Adult Education in California, the Designated Subjects Credential, is offered at some of the State Universities, such as Cal State San Bernardino and Cal State Dominguez Hills and through some of the UC Extension programs such as UC Berkeley's and UC Riverside's.   It should be noted that Extension programs are usually money makers for institutions.  They bring in money but they are not held in the same sort of respect as other UC programs.  I may take some heat for that comment, but as someone who has way too many of years of school in all the California systems - University of California, State University, Community College, and yes, UC Extension,too, I feel pretty solid in saying that.  I suppose it's yet another thing the UC system has to had to do, in order to continue to do its job, while it is continually underfunded by the state.

What troubles me is the idea that because the communities Adult Education serves are not taken seriously, neither is the profession.

There is much discussion of how to serve children from low-income and immigrant families.  This is why we have the new LCFF - Local Control Funding Formula.  Assisting those children is why Gov. Brown pushed for that formula.

But the children are not placed in context.  Ironically, the Common Core, another new change in education, stresses critical thinking.  If I put on my own critical thinking cap, the one with the words Mom, Teacher, and Human Being written on the back of it, I can see that children exist in a context - and that context is not just school.  The most important context for any child is their family and their community.

Supporting the parents, family, and community of a low-income, English learner child, the very child the LCFF hopes to help, is crucial to that child's success.

But those parents are not respected.  Their children are discussed.  In many ways, the children are presented as problems which need to be solved. And I will say, if you separate a child from his/her family, his/her community, that is, indeed, a problem which needs to be solved.  For all children need their families.  All children need their communities.  And they need families and communities which are respected.  If the family is not respected, the children will never feel respected, either, because in a fundamental way, they are not.

And how do we show respect?  By seeing the gifts and the needs that another person or community has - and taking those gifts and needs seriously.

Low-income and English Learner kids are no different from any other kids.  They need parents, families and communities which are strong and healthy, respected and empowered.

This interview with ASU Professor David Berliner, author of "Myths and Lies," makes clear that real problem we face is not how poor our schools are, but poverty, itself.

This, I think, is why it is ignored.  It's why it is the first program cut, the last one funded, and it is never, ever, really taken seriously. 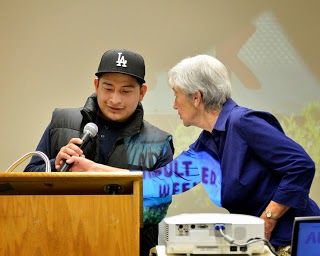 It skills and empowers those most burdened by poverty, injustice, and oppression.  It poses the greatest risk to those who would take advantage of such people.  And it demands respect for people whose power is exploited to the benefit of others.

It is, quietly and under the radar, the truly radical branch of public education.

UC Berkeley may be the home of the Free Speech movement but real freedom of speech is when the silenced speak and Adult Education, more than any other branch of public education, aims to make that happen.

When and where is education a civil right?

I wonder when those at the top of the educational food chain in California, as CAELA at Harvard is doing, will speak up about this.

It pains me, graduate of UC Berkeley and SFSU, third generation public school teacher, and anti-privatization advocate, to say it but you have done what public Higher Ed in California has not.  You have spoken up

May your brother and sister academics in California listen - not just to you but to the millions who bring so much to the table, but because they lack millions of dollars, remain unheard.