What do Anthony Cody and the Gates Foundation have to do with Adult Education?

Well, Anthony Cody is a former middle school science teacher in Oakland who has gone on to start the Network for Public Education with Diane Ravitch.

He and Diane, along with many, many others, are working to save and strengthen public education.

They are revealing how privatization and philanthropy are not good for the public.


I know, that second one is kind of tricky, right?

Philanthropy seems so cool.  Some people make a lot of money.  And then some of those people give away some of that money!  To good people!  Isn't that cool?

Well, yes and no.

Yes, because generosity is good.

But bad because money is a strong influence.

If I gave you one million dollars and then I said, and by the way, I like my coffee black and I wouldn't mind if you picked up a pound of coffee for me at the Castro Coffee Company, would you make the time to pick it up?

Reporter David Sirota found out that Bill Gates gave a lot of money to PBS and then surprise!  PBS promoted education programming that promoted Microsoft's interests.  (Microsoft is Bill Gates' company, for those who don't know.)

You can read more about Gates and PBS here.

Also surprise or not surprise if you are cynical, David Sirota was just fired without cause or notice.

You can read more about Sirota being fired here.  Oh, and by the way, Sirota also uncovered corruption on Wall Street.

So...  because we do not exist in a vacuum...  because Adult Education is part of the Public Education system here in California and all across these United States... and because privatization is creeping and crawling and leaping and clawing deeper and deeper into us...

of course it pertains!

This past Thursday, June 27th, the Educating the Gates Foundation held a rally in Seattle to bring attention to these issues.

Anthony Cody spoke at the rally.

You can see his short, quiet, and extremely informative speech here:  http://vimeo.com/99305165

If you want more info on privatization in Adult Education, go here.

I wish I could tell you the article is about the challenges that K12 Adult Schools and Family Literacy, Parent Ed, and Older Adults programs face.  But it's not.  It's about the opportunities opening up to make money in Adult Ed.  Act now!  Before it's too late!

The article is from an company that provides advice for educators (?) and entrepreneurs (!).

The article closes with this line:

While adult education has long been a “hidden” market, its programs often “shoved off in a corner,” all that seems to be changing, says to Pearson SVP Jason Jordan. “Suddenly it’s becoming a much more interesting marketplace."

EdSurge received a grant from the Joyce Foundation to "bring more awareness to young adult learning." This article is the first of a three-part series from Mr. Russo highlighting challenges, opportunities, and trends in the... get ready for it...

And no, that's not a reference to the huge amount of moola to be made in the "Adult Entertainment" industry.
This is the "Adult Education" industry.
Wow.  I guess they've already conquered the markets for food, clothing, housing, entertainment, travel, war, security, media, music, medicine, alcohol, drugs, and sex.
What else is left, really?  Of course, they need to expand to education!

Lastly, remember the new GED for most of California is from Pearson.  In fact, I should be adding the little "r" thing but I don't know how to do that and honestly, sorry.  I am not gonna do that.  I don't do it for Kleenex and I'm not gonna do it for the GED.
And Pearson is the biggest publishing company in the world. 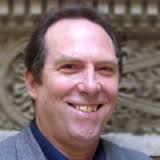 It's a quiet ten minutes full of important facts, ideas, and inspiration.

If this were David and Goliath, you can guess who is Anthony is.

And you know who wins.