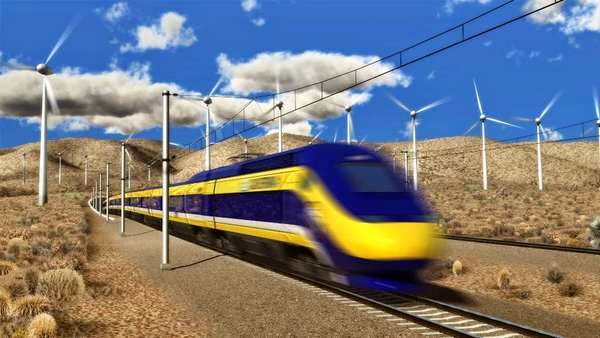 When you want something from someone... it is important to understand what they want.

That is how negotiation works.

You know what they want and they know what you want and you work, cooperatively or coercively, to make a deal you both agree on.

This - the bullet train - is what Brown wants.

For education, he wanted us to acknowledge that it's important and vote to pay for it, ourselves - and we did when we voted yes on Prop 30.

Yes, he values education, too.  But perhaps because of his decades of experience in politics, including two previous terms as governor, and having been governor when Prop 13 - against his wishes - was voted in... he knows that it is important that in order to shift money away from some things and towards others, it is important and powerful for the people themselves to do the shifting.

This is what he has asked of us, the people, and to a great extent, it has worked.

He exercised brilliant timing in his asking.  Education has been underfunded and under attack for many years.  We the people were and are ready to stand up for it and demand that it be funded and respected.

He had enough confidence in the value of education, in our recognition of that value, in our willingness to pay for it, and in our power to demand the right to pay for better education - that he put it all in our lap.  "I won't do this unless you, the people, ask and pay for it," he essentially said.

This is what Brown personally wants. It's his heart's desire.

Something else happened at that same time.

Well, the start of it, anyway.

And maybe because it was just the start of things, voters weren't thinking too clearly when they voted yes on that train.

But they're thinking now.

And mostly they're thinking no.   They no longer want that train.  Not if it's going to cost even more than estimated and not with all that that has happened and fallen apart since they voted on it back in 2008.

"The heart has reasons which reason cannot know."  - Blaise Pascal

I would argue that it's sometimes good and sometimes bad and arguing won't change a damn thing about it.

The fact of the matter is that Brown wants this bullet train for reasons that probably have more to do with his dad, also a governor of California, being the father of the California Water Aqueduct, and Brown's roots as an environmentalist, as well as his getting older and not wanting to drive any more (his words, not mine, they are in interview with him I read somewhere) than anything else.

In any case, he wants what he wants.

We need things from Brown.

We need him to understand the value of Adult Ed and to provide Adult Education with a strong budget in 2015, preferably with Designated Funding for K12 Adult Schools.

As we ask him for what we want, it is good to remember what he wants.

It sounds like the Legislature is already making deals with Brown, based on what he wants and they want.

We need to be part of those deals the Legislature and the Governor.

The Legislature, our elected representatives.  The people whose job it is to represent us.  The ones we can reach by phone and email and snail mail and visits to district and capitol offices.
We need to be aware of these deals and the context they're made in and what is at stake.  We need to use our voice and be included in the decision making process.

And for sure, we are the people who will pay for it.


Here's the LA Times article about the deal Brown and the Legislature made about the Bullet Train:


California's controversial bullet train would receive hundreds of millions of dollars in the coming year under a budget deal reached by Gov. Jerry Brown and lawmakers Thursday, a critical step toward beginning construction as the project continues to face legal and political challenges.

The agreement is one of several reached as the spending plan continued to take shape ahead of Sunday's deadline. Democratic lawmakers successfully fought the governor's proposal to cap how many hours caregivers could work in the state home care program, but they were unable to secure extra money for court operations or increase payments to doctors who serve poor patients enrolled in government healthcare.

Bullet train funding had been a sticking point in budget negotiations. The money would be drawn from the cap-and-trade program, which charges fees to polluters who emit greenhouse gases above certain limits. Under the budget deal, $250 million would be allocated to high-speed rail in the next fiscal year, which begins July 1. In each following year, the bullet train would receive 25% of cap-and-trade revenue.

The final figures represent a compromise between Brown, who wanted 33% for the train, and Democratic lawmakers, who offered 15%.

Cap-and-trade could provide billions of dollars for the bullet train over the next several years, a relatively small chunk of the project's overall $68-billion price tag. However, the money would arrive at a critical time. Voter-approved bond funding has been stalled by lawsuits, and the state needs to begin matching federal grants with its own dollars next month.

H.D. Palmer, spokesman for Brown's Department of Finance, said the governor is pleased that the budget includes "an ongoing source of funding to move this project forward."

The cap-and-trade program provides the "single largest new source of capital into our budget," said Assemblyman Richard Bloom (D-Santa Monica), and the money is required by law to be spent on programs that reduce greenhouse gas emissions.

Apart from the 25% earmarked for high-speed rail, the budget deal would direct 35% of cap-and-trade funds to other transit projects and affordable housing. The rest of the money would be available for initiatives involving natural resources, energy efficiency and cleaner forms of transportation.
A final vote on the budget is scheduled Sunday. Once approved, it goes to the governor, who can veto spending he doesn't like.

The plan includes a one-time allocation of $40 million for court construction, less than the $100-million annual funding increase sought by Democratic lawmakers. Courts have been hit hard by budget cuts over the last several years, and Chief Justice Tani Cantil-Sakauye has said more money is needed just "to tread water."

"The new trial court budget is simply insufficient for those who need access to a courthouse," Contra Costa County Presiding Superior Court Judge Barry Goode said. "Crime victims, law enforcement, those suffering from domestic violence, families in trouble and other court users will continue to have to travel long distances and endure long waits for justice."

In another setback for Democratic lawmakers, Brown refused to reverse a 10% cut in reimbursement rates for doctors who treat patients in the state healthcare program for the poor, known as Medi-Cal. Healthcare advocates say that the cut has made it more difficult for patients to receive medical care, especially at a time when Medi-Cal enrollment is soaring under President Obama's federal overhaul.
Administration officials estimate that nearly one out of three Californians will receive healthcare through Medi-Cal by next year.

"All of us have real concerns about access," Senate Budget Chairman Mark Leno (D-San Francisco) said.

However, a deal was reached to avoid upheaval in California's home care program, which helps low-income elderly and disabled residents. New federal regulations require overtime pay for caregivers, which Brown originally wanted to avoid by capping the number of hours they could work. The proposal would have reduced income for some caregivers and forced severely disabled residents to rely on multiple workers for assistance, such as cleaning, cooking and bathing.

Union officials and disability advocates mounted an intense lobbying effort to prevent the proposed cap from taking effect, and the governor eventually relented. The deal includes money for overtime and guidelines to prevent costs from surging.

"It's a big victory," said Deborah Doctor, a lobbyist for Disability Rights California.

Times staff writer Maura Dolan in San Francisco contributed to this report.
Posted by Tree C at 11:01 AM