In a clear message to Gov. Jerry Brown, an Assembly subcommittee voted unanimously Tuesday to reject his proposal to shift responsibility for adult education programs from K-12 districts to community colleges.
The bipartisan vote Tuesday followed a flurry of pink slips issued by school districts to adult educators last week.
The vote was meant as a message to school districts considering abandoning their adult ed schools that the Assembly supports current district programs and that there will be funding for those programs, said Assemblymember Susan Bonilla (D-Concord), chair of Assembly Budget Subcommittee No. 2 on Education and Finance.
“I’ve heard from many of my colleagues in the Assembly and from many constituents that the governor’s proposal is going to be devastating to adult ed,” she said. Bonilla said the Legislature’s previous actions that eliminated dedicated funding for adult education beginning in 2009 occurred “in the midst of a great financial crisis.” As the state budget tightened, $634 million previously earmarked for adult education became “flexible,” allowing school districts to use the money for any educational purpose. With budgets eroding due to the recession, many districts channeled those funds into K-12 programs and greatly reduced or shuttered adult education offerings.
“It was never the intention to destroy adult ed,” she said. “We know we’ve weakened it; it is now a very fragile system. We’re not going to continue down that path. It’s far too critical for thousands and thousands of Californians as the place where they can have their education needs met.”
Adult schools offer community based–classes to some of the state’s neediest adults, ranging from the unemployed, the disabled and the elderly to ex-offenders re-entering society and immigrants trying to learn English and become citizens. They are typically located in schools or neighborhood centers providing easy access to these students, who often are intimidated by college campuses.
Gov. Jerry Brown’s proposal includes setting aside $300 million in dedicated funding for adult education, something the subcommittee supports, Bonilla said. But, she added, she has heard from a number of community college representatives that say the colleges will not be ready by July 1, the beginning of the next fiscal year, to assume full responsibility for adult ed.
Currently some community colleges, such as San Francisco City and San Diego City, run their own adult ed programs. But many of the 112 community colleges do support adult ed programs or have only a few classes. Duplication of effort by adult schools and community colleges as well as the abandonment of adult education by many school districts when they were able to use adult school funds for any educational purpose convinced the governor that shifting responsibility to community colleges was the best way to ensure adult education for the future.
Bonilla and Dawn Koepke, a lobbyist for two statewide groups — California Council for Adult Education (CCAE) and California Adult Education Administrators Association (CAEAA) — said they will be working with the governor’s office, Sen. Carol Liu (D-Glendale), who is working on a bill,  and the Department of Finance to fashion a compromise that will ensure funding for the state’s existing district adult education programs and create clear pathways from district adult schools to college — another criticism of the current adult education system. The Senate is scheduled to consider the governor’s proposal on April 11.
“We consider this vote very important,” Koepke said. “Comments made by the Assembly members showed their understanding and appreciation that access, skills, programming and services are best served under the K-12 system. The subcommittee chair made it very clear that neither the governor’s proposal nor the committee’s actions should be a path to layoff notices or closed adult schools.”
Access has been a key argument for those opposed to the governor’s proposal. Many adult education students’ first contact with the state’s education system is through literacy classes at their children’s school.
Suzanne Ludlum, who teachers at Koreamatsu Discovery Academy and Esperanza Elementary in East Oakland, said mothers move from her literacy class to her GED class or into the job market.
“They have enough English to work and provide support for their families,” she said, adding that her “hidden agenda” is to encourage these mothers to go on to college.
Chris Nelson, president of the California Council for Adult Education and director of Oakland’s adult school, which trustees recently voted in February to close, called the subcommittee’s action “a good step in the right direction.”
“There absolutely needs to be dedicated funding for adult education in K-12 schools,” he said. “That’s the only way adult education is gong to survive.”
Going deeper
California Council for Adult Education (CCAE)
California Adult Education Administrators Association (CAEAA)
Assemblymember Susan Bonilla (D-Concord)
Senator Carol Liu (D-Glendale)
Restructuring California’s Adult Education System, Legislative Analyst’s Office, December 2012
At Risk: Adult Schools in California, EdSource, June 2012
Linking Adults to Opportunity, California Department of Education, Sept. 28, 2010
Adult Education, California Department of Education
Serving Students, Serving California: Updating the California Community Colleges to Meet Evolving Demands, Little Hoover Commission, February 2012

More articles on the good news: 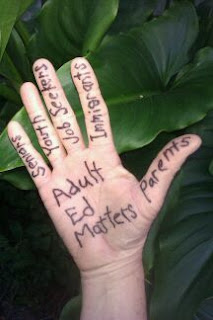 Truly, at last, the value of Adult Education is being seen.

We, the people, know it.

And we, the people, are taking on the job - our job - of making sure our representatives in Sacramento know it.

And they are listening.

It's not to late to sign the petitions.  And they matter!

Each signature and comment is instantly shared with both the Legislature and Gov. Brown.