Adult Education is a Civil Rights Issue: An Open Letter to Gov. Brown

You're framing your Education Plan as a civil rights issue.

Access to Education is always a civil rights issue.

And what branch of our public education system is most concerned with civil rights?

What branch serves the people with the least access to power?

What branch empowers people to communicate, vote, work, parent, and maintain their physical and mental health so they can contribute to California at full capacity?

What branch is entrusted with the job of giving immigrants the skills and knowledge they need to become citizens so that they can full engage in civic life?

What branch meets people wherever they're at, in mind or geography - or did before the cuts and closures hit -  to boost them to the next level?

To remind them that that not only do they have the opportunity to grow as humans and citizens, but the responsibility?

And bonus for all of us on this one, what branch is the cheapest, most cost-effective, least bureaucratic?

Governor Brown, you are not alone in your worry about civil rights.

Especially when the branch of public education first on the ground to help those most in need has been cut to the ground.

Recognize that Adult Education as delivered through the K12 system is the only branch of public education that meets people exactly as they are, wherever they are, throughout this state.  In deserts, in mountains, on the coast, in the valleys... Adult Education provides accessible programs which empower people to communicate in English, work, parent, vote, and share the best of themselves with their families, their communities, and this state.

Adult Education, especially Adult Education within K12 systems, has been easy to cut and close for the very reasons you are concerned about civil rights:

Because Adult Education serves the people least likely to complain.  Least likely because their lives are already so full just getting through each day, while struggling to create a better tomorrow.

To take advantage of that is a moral wrong.

That's why, in spite of the challenges so many Adult School students face every day, they are finding the courage and energy to speak up and demand a return in funding for Adult Education.

Because, in case you don't know, in case you missed that part of Liberation Theology, that's kind of how Civil Rights movements work.

Their lives are hard and then oppressive powers make them harder.

And then they have enough.  In spite of the fact that speaking up might result in the loss of their job or the rejection of their family or friends or cost them their health, they reach deep inside themselves and they do what the oppressive forces hope they won't do:

They write letters and emails.  They sign petitions.  They stand in rings around school district offices.   They bang pots and pans.  They wear red t-shirts. They make videos.  They march to Sacramento.  They write blogs and maintain websites and visit the capitol and bring their kids to rallies and make speeches and form alliances and make phone calls and do you know what you call all that, Governor? 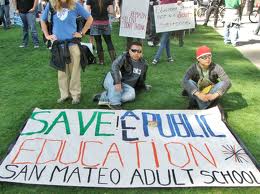 You call that a real, organic Civil Rights Movement.

Not an orchestrated, top down call to action.

But a real, grown from the roots, non-homogenized, of the people movement. 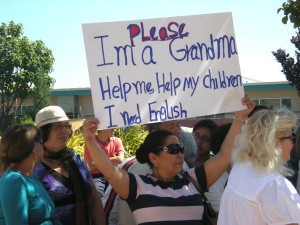 Like the kinds Gandhi and Chavez and other people who didn't end up with a lot of money at the end of the day led.

And how do those leaders fit in with your idea that the people who really get things done end up with a lot of money at the end of the day, by the way?  I mean, really... for someone who spent time with Mother Theresa, that comment confused me.

We know, I know, that you understand choice.  You were there in office when we, the people, voted for prop 13.  I didn't, by the way.  And neither did you.  I'm sure you thought that was a stupid choice.  I know I did. And we've had trouble in River City, ever since.  You know that people make choices and they are responsible for those choices.  You wanted people to "get" that they are paying for things and there is a limited amount of money and they need to choose and then they need to pay.  I get it.  I agree.  I'm a single mom.  I'm pretty good at understanding limited resources.

Now I want you to understand something.

It's called a legacy.  I know you're real, real interested in it because pretty much all you have in your office and we know all this from the articles people write about you... is legacy stuff.  A rock from your great grandfather.  A picture of your dad.

My dad was quite a guy, too.  And he, too, left a legacy.  One I try to live up to.  He helped a lot of people and he was a good guy and while he wasn't famous outside of the little town I grew up in... in that town he was well known for being a good a guy who helped many people.  So I get it.  I do.*

And here's the thing, Governor:   I'm not sure you're leaving the legacy you want to leave.

Adult Education students, in spite of the many hardships they face, are speaking up every day.  They're not getting the press coverage they deserve... but they are speaking up, I assure you.

And so far, you don't seem to be getting that.

Because we all have choices.  We all make mistakes.

And while we never get out of consequences... that's the just the way things work...

We do get the opportunity to make amends.  That's the good news at the bottom of the consequence barrel.  Reach down in there.  You'll feel it.  It's kinda soft.  It feels like a heart.

You can do something about this.

You can see this issue for what it is:  a real, genuine, organic,  from the ground up, civil rights issue.

And you can do your best to deal with it.

If you wants stats and facts, they're there.  Talk to the LAO.   Talk to United Adult Students.  Talk to Alliance for California Adult Schools. Talk to the CDE.  Talk to CCAE.

And while you're in the Imperial Valley, talk to the Adult School students in the Sweetwater system.

Maybe I should say listen to the students from Sweetwater.

Ask them about their cut and closing classes.   Ask them if they want to be part of the Community College system or if they want their K12 Adult School programs restored and funded by Designated Funding.

You might want to check the hundreds of signatures and comments they wrote in on the Rebuild Adult Education:  K12 Schools and Designated Funding Petition.  They're there. You'll see them.  And you should be able to since every one is delivered to your office electronically as they come one.


Listen to the people.


P.S.   I've voted for you every damn time, by the way.
But I swear, if you let us down on this one, I'm not voting for you again.

*  For the record, I had two dads.
My dad Don started out in turkeys and ended up in law.  He never made a lot of money but to this day I still sometimes meet old folks who say, "Oh, you're Don's daughter!" and regale me with a story of how he once helped them.  My favorite is when he emerged from a gas station bare chested because he gave a man in need the shirt off his back.  He knew he'd die early from PKD and he lived every day like it mattered.  It does.
My dad Harvey got his GED and worked as a master carpenter. In his thirties he went to college and taught Voc Ed at the J.C. (community college nowadays), a program that was eliminated when the powers that be decided that community colleges should be about strictly academics.  After all, who needs good solid union jobs in the trades?  He ended his career as an unbribeable inspector on big commercial jobs.  If he built it or watched it being built, you know it's safe.
Both men had big laughs and taught me that a life is measured not by what you earn but how you treat people.  That's my legacy and this is me trying to live up to it.
Please live up to yours.﻿
﻿
Posted by Tree C at 6:05 PM