Many people mistakenly think that somehow, inside that chrysalis, the caterpillar hardens up and hunkers down and maybe grunts a time or two as it pushes out beautiful wings... then sucks in its gut until it has the long, slim body of a butterfly.

What really happens is the caterpillar sort of melts down into something called imaginal cells.

What a cool name, hunh?   Like something Walt Disney would come up with:  Now we put the caterpillar in this little green envelope and then voila!  the imagination cells go blinkety blinkety presto chango and tranformagination magic happens!

But it is sort of like that.  The imaginal cells are like stem cells.  They can become anything.

Are you getting the picture here?

We are inside the chrysalis.

"Chris Nelson, president of CCAE, said already more than 70 adult schools have closed and another 20 have notified their staff that they plan to close at the end of this school year. One of those 20 is Oakland’s adult school, which has been in existence for 141 years and where Nelson is the administrator."  - Hoping for a Compromise, Senate Committee Puts Adult Ed Decision on Hold, Edsource, Susan Frey, 4.11.13.

While we have some triumphs -

more and more people are acknowledging the value of Adult Ed,

and there is more and better press coverage -

we're still in a tough spot.

Sweetwater just voted to close more of their program a few days ago.

And sadly, this was just after the release of this wonderful, wonderful video made to bring attention not only to the situation in the Sweetwater schools, but in Adult Ed across the state, and to encourage people to sign the petition.

Things are in flux.

That's how we got into this mess.  And not a mess we created, either.

Understanding, ideas, and action do.

So let's step back and think a minute.

We - Adult Ed, especially the K12 Adult Schools - are in a tough spot.

Now Gov. Brown says, "What a mess!  What a messy, messy, mess-mess we have!  Let's clean it all up!  I will get my broom and sweep all the Adult Ed into Community Colleges!  See how good that looks!  Oh no... there isn't room for everything?  Okay, leave out seniors and parents and the disabled.  Now sweep what's left into this it's all about making everything work for work slot.  Doesn't that look good?  Aren't all seniors like me and they're still working at good paying jobs in their seventies?  It's all about work!  And getting ready for work!  I really like work!  Wow, this is going to look great when this is all swept real nicely into this little compartment of the Community College system.  I am excited!  I'm leaving a legacy just like my dad did.  And no more mess.  I'm getting that nice, clean, tidy feeling.  Aren't you getting that nice, clean, tidy feeling?"

But here's the deal:  The mess is good.

The mess is what's inside the chrysalis.

If you cut open a chrysalis mid-magictranformagination (please don't!), you are going to find guess what?

At that point, you are in trouble.  You've cut something that was a living organism in the process of a natural change that is leading to something beautiful.

But let's face it.  Change happens.

We can talk about why and we should.  We can learn from the "whys."

But there's another very important way to look at change:

It happens.  Over and over it happens.

In fact, it's happening RIGHT NOW!

In you, in me, in everyone and everything that we depend on not to change so that we can have that nice, clean, tidy feeling, so we can feel comfortable.  So we don't have to be afraid.  No anxiety.  No uncertainty.  No more worrying about what is going to change next cuz gosh darnit this change feeling is just out of control!  In fact, it kind of makes us FEEL out of control, doesn't it?  I know it does me.  Change!  Scary!  No control!  Eeek!

But it keeps on happening!  Inexoribly.  Steadily.  Like the footfalls of a panther stalking us in the night.

So how can we make that truth work for us in this situation?

We can be part of the change.

And what's more, look there at the bottom of the goody bag of baggage we're given when we enter this life...

Way down at the bottom...

Under all the other stuff like cancer and divorce and kids dying and mosquitoes in your tent when it's raining outside...

I'll wait for you.

Did you find it?

Yeah, you know like falling in love or help showing up in the nick of time or an old friend who understands you or a book that speaks the language of your heart when no one else does.  Like that.

Hold onto that piece, will ya?

Don't let it slip down to the bottom of your goodie bag.  Pin it to your lapel.

Here's something true, pretty much in that category:

The Legislature works for us.

The Governor works for us.

I know.  More crazy talk.  You're saying, "But Cynthia.  It's too late.  They're already elected.  They'll do what they want.  There's no use.  There's no point.  I can't make anything happen.  I'm a helpless victim and the world's against me and it's scary to try and I might fail and it hurts when I get up it hurts when I walk it hurts when I think how can I like a world where everything isn't exactly the way I like it and I didn't get everything I want?"

We know... somewhere deep inside ourselves... somewhere so bone deep and true that it wakes us up at three in the morning:

If we take responsibility for what leverage we have, we have power.

Can we make the world exactly as we like it?

If we could, believe me, I'd be waking up in Hawaii right now, a hot cup of coffee at my side and a nice set of flippers ready for me to slip on and swim in.

While instead I am on my old futon couch with my trusty one-eyed cat.  The cat with the bullet hole in his gut.  Okay, it's not a real bullet hole.  It's a bust abcess.  Don't worry.  He'll be okay  We treat these things at home all the time. I don't have the money for vet visits unless it's serious business.  We can handle the "bullet holes."  We do it farm style around here.  Make do.  Make it work.  You get five minutes for complaining then hush up and do something or just hush up.  (Aren't you glad I'm not your mom?  And you're not my cat?  Lol.)

Each of us is like one little magic transformation imagination cell.

And if every one of us imaginal cells decides to be a butterfly, chance are, we might become a butterfly!

The Senate subcommittee decided not to vote yay or nay but to wait and see what Gov. Brown produces with his May revise.  The Assembly voted no on his plan.  More and more and more people are saying no, no, no.  They're saying they just don't like it.  Or they don't like the way Gov. Brown has set it up.  But they don't like it.  So... really... there is no plan right now.  No real, realistic, agreed on plan that everyone has agreed to and voted on and said yes and things are happening.  No.  There is not.

Things are in process.

Gov. Brown will think about what the legislators and the Legislative Analyst Office and Superintendent Tom Torlakson and all the many others have said...

and he will think about YOU say.

This gets me back to the power bit.

You can SIGN THE PETITION!  Over 3000 people already have!

You can think about what you want and you can tell the Legislature and the Governor what that is.

In order for change to occur in the chrysalis, there must be some agreement between the cells.

If the people of California do not want Adult Ed to be completely slashed to the bone....

If they don't want all the K-12 schools to be closed and for Adult Ed to be swept soley into the Community College districts...

and they TELL THE GOVERNOR AND THE LEGISLATURE this...

then it will be very very very hard to turn that mess into the Governor's plan.

I know, it's hard and scary and overwhelming to think that we have power because like I said

and let's face it, we all run from responsibility somewhere and many of us run from it a lot.  I won't say everywhere but you know what (and who) I mean, right?

I say again, Aren't you glad I'm not your mother?!

We still have time.  Things are not decided.

we don't have a ton of time.

Things are in a process of change.

Gov. Brown has a plan.  He has an idea of what he wants that mess to become.

If we do nothing, chances are, he'll get some version of his plan.

I don't think that's a bad thing.  I might even admit to being a strong person, myself.

It takes one to know one.

But he does not necessarily know what is best for California.

He has a vision.  His vision.  In fact, he is very much a man of vision.

We all have visions.  That's what it means to be human.

We have ideas and hopes and dreams.

What do you want for Adult Ed?

Once again, I encourage to take a moment and use your power.

Think about what you want for Adult Ed.

If you agree with the ideas in the Petition to Rebuild Adult Ed (Keep the K12 Schools & Obtain Designated Funding), then sign it.

If you have some other idea, email your Legislators and the Governor.

Or write a letter.

Or make a video.

We all have power.

And here's another scary truth.

It would be almost nice if we could give it away.

It sounds nice, doesn't it?  I don't want to deal with something so here, you take it.

Except, once again as we way know down in the clavicles of our heart, it doesn't work like that.

You can't really, really, truly, really give your power away.   You just can't.

Because power is about choice and we all have it.  That's what it means to be human.

You're stuck with it until you die.

All you can do is choose to deny your power so that it turns your dreams, goals, and joys into obstacles, impasses, and sadness.

We know all about that, too, don't we?

So let's just be real here.

How are we going to use it?

I know how I'm using mine.  I just sat here with my trusty cat and wrote this blog post.

I already signed the Petition to Rebuild Adult Education.  (Heck, I started it!  Lol... )

We are all together magic transformation imagination presto change imaginel cells together.

And if we work together...

If our dreams agree...

We can become a butterfly. 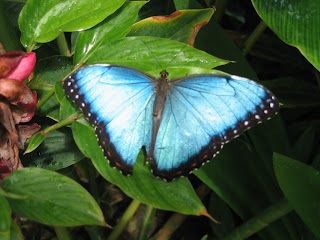