Obama was the new guy.

Tina Fey was doing a dead-on impression of Sarah Palin on SNL.

And Wall Street was starting to collapse. 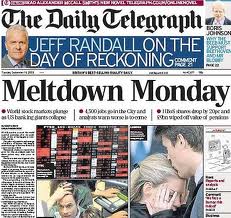 What does that have to do with Adult Education and Public Education, in general?

There is a connection between Wall Street and Main Street.

And there is a connection between Lehman Brothers and the San Mateo Adult School.

We'll focus on just the latter in this post.

And some of that money was for schools.

As Principal of San Mateo High School Yvonne Shiu wrote in November of 2008:


School districts in California are required to deposit their cash with the county in which that school district resides. The schools in San Mateo County recently lost $155 million due to the Lehman Brothers bankruptcy. SMUHSD’s estimated loss will be approximately $5.8 million; including interest not gained. The loss will be spread across all the District’s funds including the General, Cafeteria, Adult, Building, Capital Facilities, Special Reserve and Trust funds, with the greatest impact on the General and Building funds.

And that, my friends, was the beginning of where we find ourselves now... fighting to justify our shrinking right to a shrinking slice of an ever-shrinking pie.

In our crazy, busy world, it's easy to forget what happened yesterday, let alone four years ago.

But knowing what happened four years or forty four or four hundred and forty four years ago often tells us why something is happening today.

That's one of the benefits of public education.

A good free public education helps everyone understand why we have the choices we have today and empowers them to make the best choices possible for tomorrow.

Email ThisBlogThis!Share to TwitterShare to FacebookShare to Pinterest
Labels: How Things Work, Press, Think About It